Frenectomy is a medical term used for the procedure involving the surgical removal of the frenum present in the mouth.

What is a frenum?

Frenum (plural: frena) is a loose fold of connective tissue that attaches gum, underlying periosteum or alveolar mucosa to the lips, tongue or cheeks.  There are mainly 3 types of frenum:- 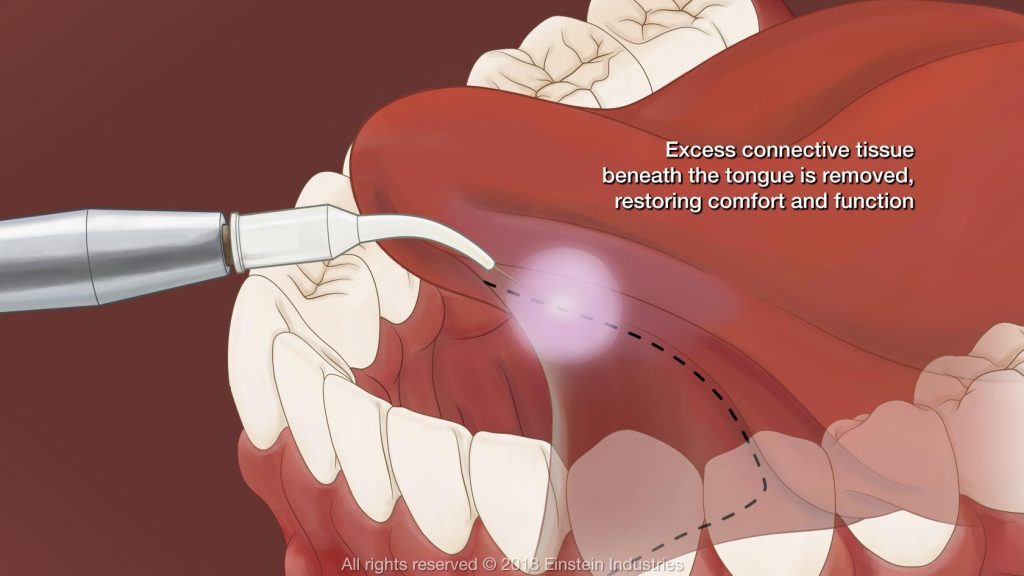 When should Frenectomy be Done?

Not everyone needs to undergo a frenectomy, there are certain medical or dental conditions in which frenectomy is either only or the best available choice left in the hands of the clinician. Some of these conditions are:-

In children who are breast or bottle-fed (generally infants), along lingual frenum makes it difficult to feed the infant from a bottle. Such a condition is known as an ankylosed tongue,  frequently referred to as a tongue-tie. This condition should never be left untreated as it may further, lead to difficulty in swallowing.

Another condition where frenectomy is relegated by a dentist is in the case of abnormal elongation of a labial frenum. If the frenum extends too far down near the gum line, it can interfere with interferer growth and spacing between the central incisors. This results in poor aesthetics. In such conditions, a frenectomy is a good choice to preserve the good strength and aesthetics of the individual.

An extended frenum exerts an excessive pull on the gum, which can create or aggravate gingiva recession. When the gum tissue is thinned around the teeth, a frenectomy can help control a receding gum problem.

Frenectomy are mainly of two types:-

In maxillary frenectomy, more commonly known as a labial frenectomy, the frenum connecting the upper gums to the upper cheeks are incised. Such a condition is known as lip-tie.

It is more common than labial frenectomy. In this, lingual frenum that attaches the tongue to the floor of the mouth is incised.

How Much does Frenectomy Cost?

Frenectomies are performed by train oral surgeons. The average, fee for one tie excision is between $300- $350. Additional frenectomies range from $100-$150 as done in the case of tongue and both lip – ties.

Frenectomy can be conducted in two ways:-

This is the age-old method of tissue incision that has been from the early days. In this technique a narrow incision around, the frenal area is completed.

Laser surgeries are recent advancements in medical sciences. These are more efficient and effective alternatives to conventional surgical methods.

An elongated frenum poses a serious threat to the individual and can lead to difficulty in breathing as well swallowing along with speech. Thus, a frenectomy should be performed in childhood itself to avoid such complications.

What is Oral Fibroma? Its Causes, Symptoms, Treatment, and Prevention?